Moeis Hassan was born in Samarinda, East Kalimantan on June 2nd 1924 and died in Jakarta on 21st November 2005. He was the founder of Indoensian Youth Association/ Roekoen Pemoeda Indonesia (1940), Center for Civil Teaching and Education/Balai Pengajaran dan Pendidikan Rakyat (1942), and Indonesian National Association of Branch Samarinda/ Ikatan Nasional Indonesia Cabang Samarinda (1947). He was elected as Chairman of the National Front (1947) as a coalition of organizations that supported the Indonesian struggle and opposed the federation as the puppet state formed by Van Mook.

Research on the biography of Abdoel Moeis Hassan was compiled with an analysis that uses a diachronic historical approach. The description of this study applies a social and political approach to understanding its life. 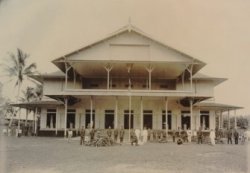